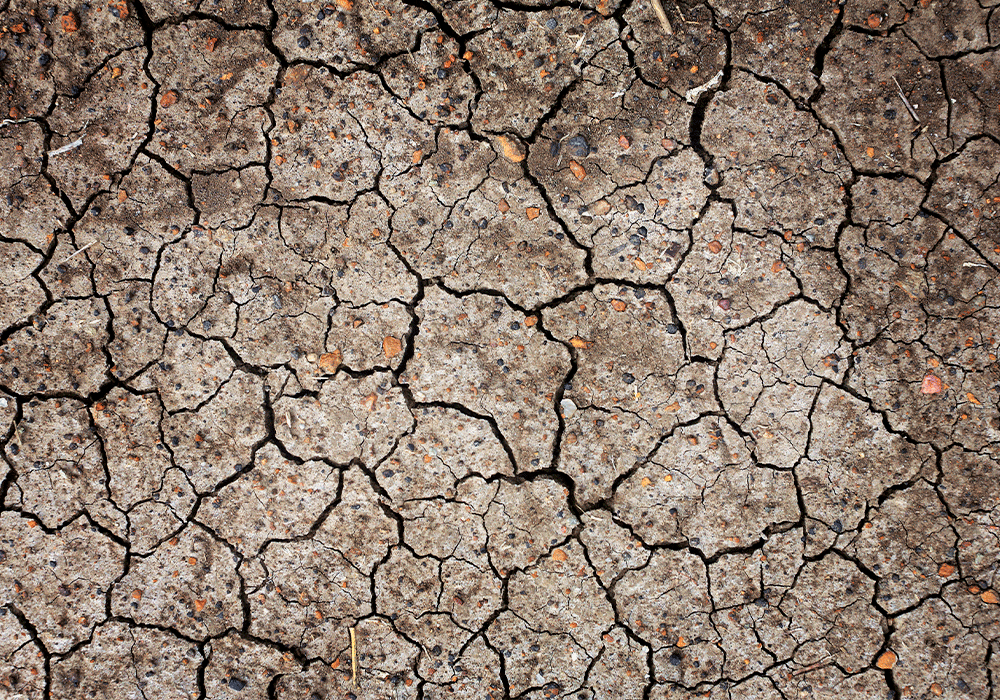 Climate change remains one of the greatest challenges facing the world, and the UN Framework Convention on Climate Change (UNFCCC) was an important event in the global efforts to refine and strengthen international collaborative and regulatory mechanisms to improve climate governance. One of the key objectives of the PAP delegation at the 24th Conference of the Parties (COP24) was to carry the hopes, aspirations and concerns of the African people to this gathering. The delegation sought to do so by providing support to the African common position through advocacy and other related activities, and contributing to the current climate-change debate by offering the perspective of the continent’s Parliamentarians. Other important objectives for the PAP at COP24 were to build capacity of PAP Parliamentarians on climate issues and to share best practices for addressing the negative impacts of climate change; advocate for adequate climate legislation to implement and enforce the Paris Agreement in African countries; and enhance the visibility of the PAP and its mandate.

Members of the PAP, led by Hon Stephen Julius Masele, First Vice-President of the PAP, participated in activities that ranged from technical side events and bilateral meetings with various stakeholders to press conferences. The PAP delegation also participated in the Inter-Parliamentary Union (IPU) meeting and the Africa Day programme at COP24.

Advocacy for climate legislation
The PAP organised a COP24 side event in December 2018 to lobby and advocate for climate legislation. Its theme was Climate Finance and Status of Climate Legislation in Africa, and its main objective was to discuss the issues of climate finance and further assess the status of climate legislation in Africa. The side event was moderated by Hon Kone Dognon, Chairperson of the PAP Committee on Rural Economy, Agriculture, Natural Resources and Environment. The expected role of Parliamentarians in advocating and lobbying for the measures required to mitigate the negative impacts of climate change in Africa was highlighted at the event. One such important measure is the African Climate Legislation Initiative (ACLI), which is a culmination of years of work by a group of civil society members and Parliamentarians concerned about climate change and its negative effects on the livelihoods of the African people.

Other initiatives driven by the PAP in the area of climate change include raising awareness and developing a model law on climate change that is envisaged to guide and inform African countries in developing their own national legislation. The programme of the side event also covered an update on climate change negotiations by the African Group of Negotiators (AGN). Hon Mboni Mhita, President of the PAP Youth Caucus, delivered a presentation and led a discussion on the issue of inclusive participation in climate policy development and legislative work; and on the mobilisation of the PAP Caucuses (namely Youth, Women and Regional) to build momentum on climate action. This PAP side event was well attended and attracted many participants, which enhanced the positive image and visibility of the PAP.

IPU Parliamentary Meeting at COP24
The meeting arranged by the IPU was a follow-up to the highly successful meeting held in Bonn, Germany, in November 2017. The meeting at COP24 was aimed at providing Parliamentarians with an opportunity to obtain first-hand information on the main issues and orientations of COP24; to enable them to interact with experts and negotiators directly involved in the UNFCCC decision-making process; to gain better knowledge of the recommendations included in the IPU’s Parliamentary Action Plan on Climate Change; and to discuss and identify ways of ensuring implementation of the Paris Agreement. Niklas Hagelberg, Co-ordinator of the UN Environment’s sub-programme on climate change, delivered the keynote address. In his speech, Hagelberg emphasised the importance of moving into the implementation phase of the Paris Agreement and emphasised key areas to be addressed through national policies and laws.

The IPU meeting included panel discussions on how legislators can support the effective, sustainable and ambitious implementation of the Paris Agreement and nationally determined contributions (NDCs); to what extent the legal investment framework supports or hinders funding for renewable energy; and what measures have proven effective. The discussions also highlighted the challenges of implementing the necessary conditions to optimise the effectiveness of economic instruments. This emphasised the greater impact that legislators and Parliamentarians can have in achieving the Paris Agreement goals and highlighted how Parliaments can assess the impact of climate change legislation.

Africa Day
This important day dedicated to Africa is a key feature of the continent’s presence and participation at the various COPs. Africa Day originated at COP17 and was organised by the continent’s principal regional institutions, namely the AfDB and the AU Commission (AUC), along with Nepad and the UN Economic Commission for Africa (ECA). The theme of the Africa Day side event held during COP24 was Operationalisation of the Africa NDC Hub: Going Further and Faster with NDC Implementation in Support of Agenda 2063. The main objective was to provide a platform and opportunity for Members, development partners, members of the private sector and civil society and various key stakeholders to discuss the implementation of their NDCs, including support from the Africa NDC Hub. 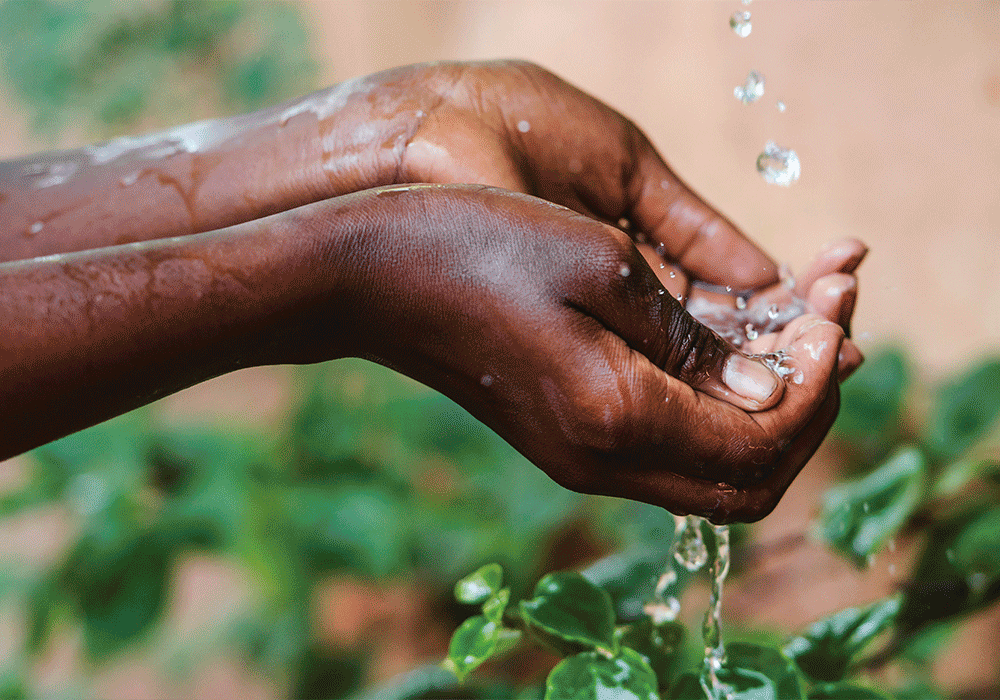 Africa Day was a good opportunity for the PAP to engage with other stakeholders, including the AGN, ECA, AfDB, AUC, Nepad and the Pan African Climate Justice Alliance. During the session of Parliamentary dialogue, moderated by Dr Fatima Denton, Co-ordinator for the African Climate Policy Centre of the ECA, the PAP delivered a presentation on the ACLI. The presentation drew a lot of attention and various partners acknowledged its vital role in advancing sound climate legislation in Africa.

Building capacity on climate change
Side events represent an important activity during COPs, where all stakeholders, including Member States, development partners, civil society, multinational companies, research institutions, academia, and others, extensively discuss various issues related to climate change. In addition, the side events present a valuable opportunity for organisations not only to engage in the current debate on climate change but also to network and brand their products and services. In total, 203 side events were organised during COP24. Their main themes of discussion ranged from agriculture and climate action to enhancing ambitions. Other themes included issues related to energy, gender and human rights.

The participation of the PAP delegation in the side events also represented one of the key targeted activities of the PAP, since it provided a good opportunity for building the technical capacity of
Parliamentarians, and for their engagement and networking with all relevant stakeholders. 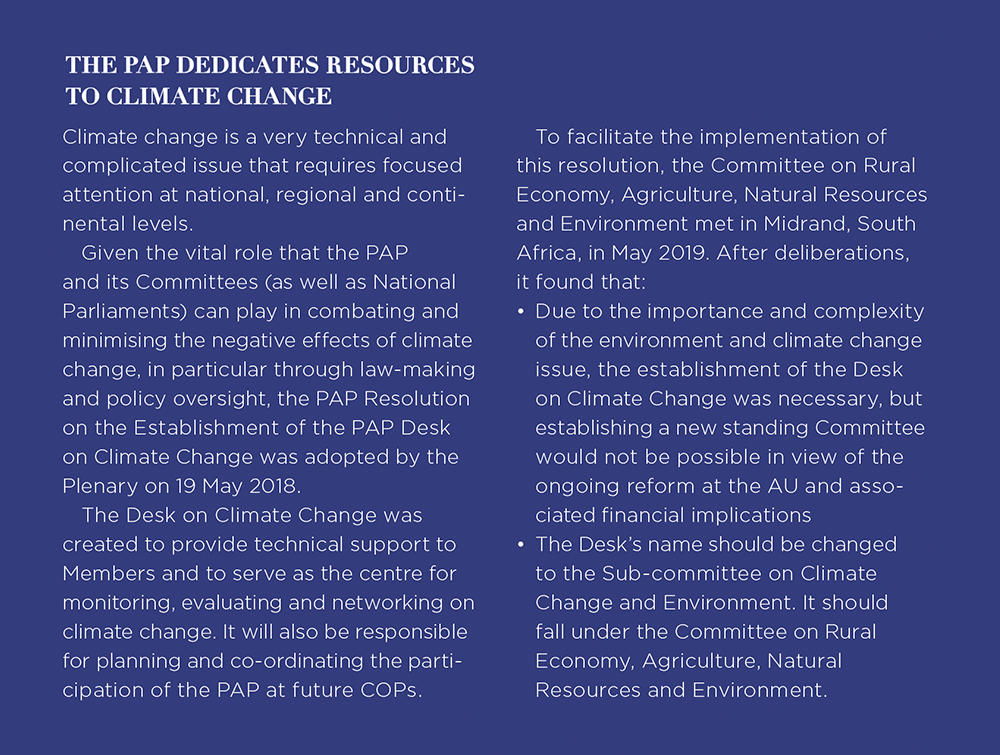 Enhanced visibility of the PAP
Another important benefit of the PAP’s participation at COP24 was to raise the organisation’s profile among the media and international climate change stakeholders. Members of the PAP were invited by organisers of side events to participate as speakers, discussants or panellists. Enhancing the visibility of any organisation through involvement in a global event such as COP requires vigorous and focused participation in targeted activities, and a clear media plan. By participating in key events and ensuring the PAP’s media visibility through press conferences and press releases as well as social media, the organisation was able to show that it is contributing to international efforts to fight the negative effects of climate change, and is a solid and reliable partner in the global processes.

Looking to the future
The report on the PAP delegation’s participation at COP24 made several important recommendations about future climate change events. For the PAP to draw optimal benefits from participating in meetings and side events at COP, it is recommended that the participants selected to be part of the delegation be immersed in the subject of climate change, the environment and related fields. This will allow them to be fully involved in clarifying the PAP’s positions whenever it participates in COP processes.

The PAP delegation recommended that:

The PAP dedicates resources to climate change
Climate change is a very technical and complicated issue that requires focused attention at national, regional and continental levels. Given the vital role that the PAP and its Committees (as well as National Parliaments) can play in combating and minimising the negative effects of climate change, in particular through law-making and policy oversight, the PAP Resolution on the Establishment of the PAP Desk on Climate Change was adopted by the Plenary on 19 May 2018.

The Desk on Climate Change was created to provide technical support to Members and to serve as the centre for monitoring, evaluating and networking on climate change. It will also be responsible for planning and co-ordinating the participation of the PAP at future COPs. To facilitate the implementation of this resolution, the Committee on Rural Economy, Agriculture, Natural Resources and Environment met in Midrand, South Africa, in May 2019. After deliberations, it found that: